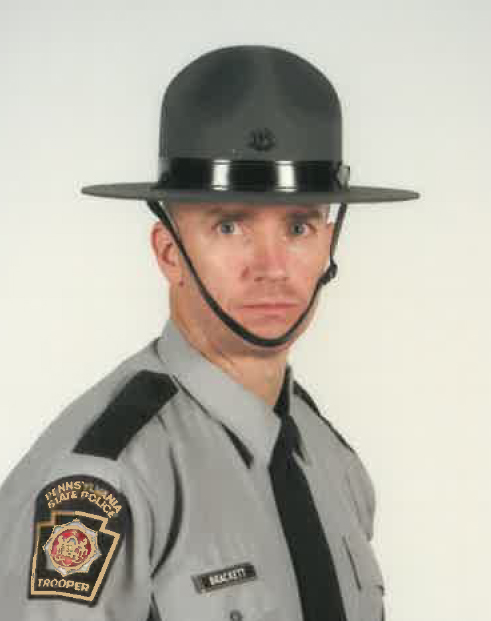 “Our prayers and condolences go to the family of Trooper Donald C. Brackett. Trooper Brackett will forever be remembered as an extraordinary individual and a hero. Trooper Brackett’s oath was to serve and protect those in the commonwealth, and he died in pursuit of that mission. We will never forget his sacrifice.”

The Pennsylvania State Police also made an announcement about the passing of Trooper Brackett. You can read that below.

Members from the Troop M, Trevose and Troop T, King of Prussia stations responded to westbound I-276 at mile marker 351.9 in Bucks County around 11:30 a.m. after Trooper Brackett failed to answer radio transmissions. He was found unresponsive outside of his patrol vehicle from an apparent medical episode. Upon discovering him, members immediately began CPR.  Advanced medical personnel transported him to Jefferson Torresdale Hospital in Philadelphia, but were unable to revive him.

“All personnel of the Pennsylvania State Police are deeply affected by this loss,” said Lieutenant Colonel Evanchick. “Our thoughts are with Trooper Brackett’s family and friends as they mourn his sudden passing.”

Trooper Brackett enlisted in the Pennsylvania State Police in October 2001. He was assigned to the Patrol Section of Troop T, King of Prussia at the time of his death. He had also been assigned to Troop K, Media and Troop M, Trevose during his career with the department.

A graduate of the 110th cadet class, Trooper Brackett was also a veteran of the United States Marine Corps. He was 58 years old.