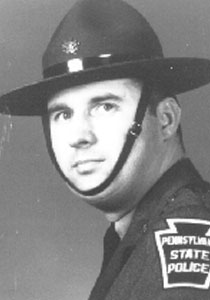 He served with the US Navy from August 1957 to August 1961 aboard the USS Talladega.

Trooper Evans enlisted in the Pennsylvania State Police from Philadelphia on September 15, 1966. Following graduation from the Academy, he was assigned to Troop N, Hazleton. He was 27 years old and 6’1½” tall.

On January 6, 1983, Trooper Evans was assigned to patrol Route 209, Monroe County. At approximately 9 a.m., about 3/4 of a mile north of Snydersville, Trooper Evans was in pursuit when his patrol car skidded on the icy highway, skidded across the grass median, and struck a van head-on. He was pronounced dead at the scene.

He was survived by his wife, Mrs. Patricia Evans, of Long Pond and three daughters. Mrs. Evans was presented with the State Police Cross. A memorial scholarship fund was established to assist the families of law enforcement officers.

Trooper Evans, 44, had completed 16 years and 4 months as a Pennsylvania State Trooper.