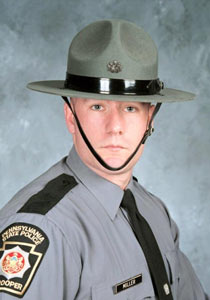 Police officers in Nazareth, Northampton County, responded to a reported Protection from Abuse order violation in which a man drove from the scene with his 9-year-old son. The suspect led municipal and state police on a 40-mile pursuit through Northampton and Monroe counties before the fleeing vehicle was brought to a stop in Coolbaugh Township, Monroe County.

As troopers approached the car, shots were exchanged, with bullets hitting and fatally wounding Trooper Joshua Miller and wounding Trooper Robert J. Lombardo age 35. The suspect was killed and his son was taken safely from the car.

Miller graduated from the State Police Academy in April 2003 and was assigned to Troop M, Bethlehem, Northampton County. He later transferred to Troop N, Swiftwater.

Miller served in the Marine Corps prior to graduating from the State Police Academy.

Trooper Miller is survived by a wife and three children.