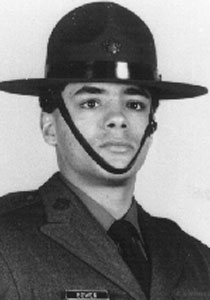 He enlisted in the Pennsylvania State Police from Franklin on December 8, 1980. Following graduation from the Academy, he was assigned to Troop D, Butler. He was 24 years old and 5’9½” tall.

On October 26, 1983, Trooper Bowen was detailed to assist another Trooper with a stolen vehicle incident. As he was traveling on US Route 19 just south of Mercer, he apparently crested a hill and did not see a slow-moving truck-tractor ahead. His patrol car slammed into the rear of the truck. He was pronounced dead at the scene.

Trooper Bowen was buried with full military honors at Franklin Cemetery in Franklin. He was survived by his wife, Mrs. Deborah Bowen, of Franklin.

Trooper Bowen was 27 years old and had served two years and ten months as a Pennsylvania State Trooper.