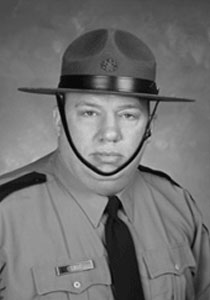 Blake T. Coble was born on November 15, 1964, in Pittsburgh, Pennsylvania.

Trooper Coble was critically injured in an on-duty motor vehicle crash on October 4, 2012, when a tractor-trailer failed to stop at a stop sign and struck his patrol vehicle. The crash occurred at an intersection located at SR 168 and Blackhawk Road in South Beaver Township, Beaver County. Trooper Coble was transported to Heritage Valley Beaver Hospital where he died of his injuries shortly after the crash.

A memorial service was held on October 9 at the Beaver County Community College in Monaca, Pennsylvania. The funeral service was attended by numerous family, friends and law enforcement personnel. Troopers from as far away as California and Texas were in attendance for the service. A full military honor graveside ceremony was held at St. Mary�s Roman Catholic Cemetery in Beaver Falls, Pennsylvania immediately following the memorial service.

Trooper Coble is survived by his wife Brenda, who is a Police Communications Operator at Troop D, Beaver Station, and his two children.