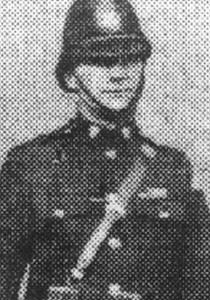 Before his enlistment with the Constabulary, McCarthy served four years with the British Army from March 20, 1907, to March 9, 1911. Soon after his arrival in America, he served with Battery B, U. S. 102nd Infantry, 26th Division, from May 23, 1917, to April 29, 1919. Known as “YD”, the Yankee Division was commanded by General Clarence Edwards and saw action in France during World War 1. McCarthy enlisted with the Constabulary from Westboro, Massachusetts, on September 1, 1919, and was assigned to Troop E, Harrisburg. He was 31 years old.

On May 12, 1931, McCarthy, accompanied by Privates Russell Knies and Philip Duane, were detailed to assist the Fulton County sheriff in serving a custody warrant on Marshal Lodge, a belligerent mountaineer, at his home in Brush Creek Township. When McCarthy, admitted by Lodge’s mother, entered the kitchen, Lodge fired a pistol he had concealed, fatally wounding the Sergeant. Lodge fled to the upstairs. Knies, who was standing at the door with Duane, ordered Duane to take the Sergeant to the car, but before they could reach the car, McCarthy fell to the ground and died. Searching for Lodge, Knies was wounded, but not seriously. Duane ran to a home located atop the hill to phone for assistance. When assistance arrived, McCarthy’s dog, Omar, was freed from the car to enter the house. When located by Omar, Lodge shot Omar. Knies was again wounded by gunfire as he tried to fire a tear gas bomb into the house. Outdoors, Omar, seriously wounded, was found crouched aside McCarthy’s body. Lodge was finally apprehended; but his right arm was shattered by rifle fire and had to be amputated. He was adjudged hopelessly insane, and transferred to the institution for the criminally insane at Fair View, Wayne County. Knies and Omar both recovered from their wounds. Duane, at the urging of his parents, resigned from the constabulary on June 15, 1931.

Knies advanced through the ranks to Major before his retirement in 1963. Members of Troop E were present at the formal ceremony on November 12, 1931, when Omar was presented the American Kennel Club Medal of Heroism. He was the only animal so decorated by the Constabulary, earning him a special place in its history.