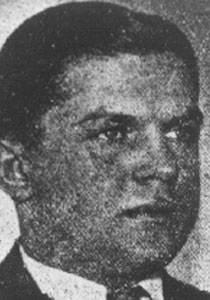 Joseph A. Hoffer was born November 7, 1907, at Mount Carmel, Pennsylvania.

He was 21 years old when he enlisted in the Constabulary from Kulpmont on September 1, 1929. He was assigned to Troop A, Greensburg.

At 8:00 a.m. on April 22, 1937, Private Hoffer, Sergeant Vincent F. Bunch, Privates Paul A. Rittelmann and Edward P. Harrison, Highway Patrolmen Howard M. Jaynes, J. M. Evans, and W. J. Urick were dispatched to apprehend Hamilton Leftwich. Leftwich had escaped from the Fayette County Jail. The detail surrounded the house in which the fugitive was barricaded. While approaching the house from the rear, Private Hoffer was seriously wounded when Leftwich fired a shotgun from an upstairs window. Leftwich was killed in the exchange of gunfire. Private Hoffer was taken to Uniontown Hospital where he died at 11:42 p.m. on April 27, 1937.

He is buried in the Sylvan Heights Cemetery in North Union Township, Fayette County. Private Hoffer was survived by his wife, Mrs. Anna L. Hoffer, of Uniontown. At 29, he had completed seven years and eight months of Constabulary service.