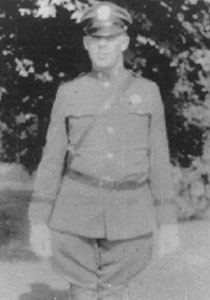 At 4:05 p.m. on January 31, 1930, Lawry was patrolling the Sullivan Trail, Whites Ferry, Wyoming County, near the St. Michael’s Industrial School, when he was struck by a motor vehicle driven by Louis Engel, 17. Engel was driving on the wrong side of the highway. Lawry was thrown from his motorcycle and died at the accident scene. Engel was charged with involuntary manslaughter.

Lawry was buried in Shady Lane Cemetery, Chinchilla. He was survived by his mother, Mrs. Elizabeth Lawry, of Chinchilla. He had served three and a half years with the State Highway Patrol.