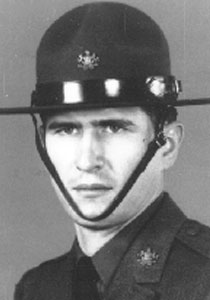 He served with Company C, 2nd Battalion, 109th Infantry, Pennsylvania National Guard. He enlisted in the Pennsylvania State Police from Berwick on April 19, 1970, and was assigned to Troop K, Philadelphia. He was 25 years old and 5’11” tall.

On August 15, 1977, Corporal Koscelnick was dispatched to aid a motorist, Mary Fleming of Wayne, whose car was disabled on the Schuylkill Expressway. Corporal Koscelnick summoned a tow truck which was operated by James Della. As Corporal Koscelnick and Mr. Della were standing beside the disabled vehicle on the driver’s side, a vehicle traveling westbound went out of control as the driver, David Sylvester, 21, of Norristown, attempted to pass another car on the right. Both men were struck and thrown 100 feet. They were pronounced dead at Montgomery Hospital. Sylvester, who was en route to his grandfather’s funeral, was treated for injuries and released. He was charged with homicide by motor vehicle. Fleming was not injured.

Corporal Koscelnick was buried with full military honors at St. Mary’s Cemetery, Berwick. He was survived by his wife, Mrs. Constance Koscelnick, of Bally. She was presented with the State Police Cross on January 18, 1978. Corporal Koscelnick, 33, had completed seven years and four months as a Pennsylvania State Trooper.