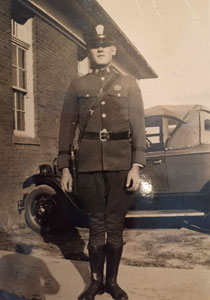 He enlisted with the State Highway Patrol from Osceola Mills on October 1, 1928, and was assigned to Troop C, Bellefonte. He was 25 years old and 5′ 6″ tall. Fulton was en route from Harrisburg to Erie with a new motorcycle on June 4, 1936. At 9:30 p.m. he was on U. S. Route 19, in Summit Township, 2½ miles south of Erie, when he collided with a motor vehicle driven by Francis Layden, 33, of Union City, Pennsylvania. Fulton was crushed underneath the motor vehicle and died instantly. Layden was absolved of blame. Fulton is buried in Umbria Cemetery, Osceola Mills. He was survived by his mother, Mrs. Bessie Fulton, of Osceola Mills. Fulton, 32, had completed seven years and eight months of State Highway Patrol service.