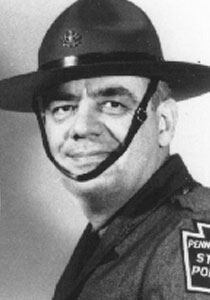 He was 23 years old and 5′ 10½” tall. At 7:10 p.m. on December 9, 1971, Corporal Valent was on patrol. He had stopped to question three young men in the Jamesway Department Store parking lot on U.S. Route 22, just outside of Lewistown. He called the Lewistown Station to report he was bringing the three in. They claimed to be from New York City and had no identification. The three young men were put in the back seat of the patrol car, and Corporal Valent proceeded to the station only a quarter of a mile away. Two blocks from the barracks, one of the three shot Corporal Valent in the back of the head twice. The trio escaped.

He was survived by his wife, Mrs. Madeline Valent, of Lewistown. At 49, Corporal Valent had completed 25 years of Pennsylvania State Police service.

The three escapees were later identified as Charles E. Koons, 22; Charles H. Knisley, 20; and Mark Geddes, 22, all of Altoona. The morning after Valent’s death, Koons was shot and killed in a shoot-out with Troopers in Altoona. In the shoot-out, Trooper James H. Bradley, and Altoona Police Officer William Carter were wounded. Knisley and Geddes were later apprehended and charged with Corporal Valent’s murder.