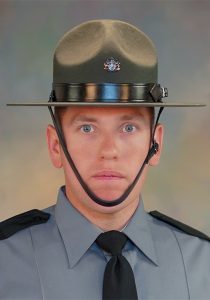 Trooper Branden T. Sisca was a graduate of Perkiomen Valley High School in Collegeville and West Chester University. He enlisted in the Pennsylvania State Police in February 2021 and graduated as a member of the 161st cadet class. He then spent seven months assigned to Troop K, Philadelphia. He is survived by his wife, Brittany, who was expecting the birth of their daughter at the time of his death; and parents, Craig and Marcy. He also proudly served as the chief of the Trappe Fire Company in Montgomery County.

On Monday, March 21, 2022, Trooper Sisca and Trooper Martin F. Mack III were dispatched to a report of a pedestrian on I-95 south, near the sports stadiums in Philadelphia. They located the man, Reyes Rivera Oliveras, 28, of Allentown, and were placing him in their patrol vehicle when an intoxicated woman struck and killed all three men with her vehicle shortly before 1:00 a.m.

“I watched Branden become a leader, a dedicated person being a first responder, passionate to help others, and just an amazing human being,” said longtime friend Trooper Ross Greenwood at the service.

At 29 years of age, Trooper Sisca was the 102nd Pennsylvania State Trooper who died in the line of duty. A funeral service was held on April 2, 2022, at his alma mater, Perkiomen Valley High School in Montgomery County.