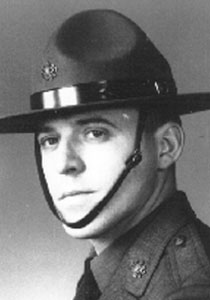 He enlisted in the Pennsylvania State Police from Trexlertown on January 4, 1968, and was assigned to Troop J, Lancaster, upon graduation from the Academy. He was 23 years old and 5’9½” tall.

At 7:30 a.m. on April 12, 1989, Trooper Bilheimer was the observation passenger for pilot Corporal Paul Almer when they took off from Aviation Patrol Unit No. 1 based at Reading Municipal Airport. They were assigned to search the Susquehanna River for the body of James C. Groff, a 50-year-old farmer from Holtwood, who reportedly jumped into the river. At 9:44 a.m., while flying at an altitude of 90 feet, the helicopter struck a 34,000-volt power line. The craft crashed into 10 feet of water in a channel between Lower Bear Island and Boeckel’s Landing on the west bank of the river in southern York County, just north of the Maryland border. Scuba divers from several agencies found the wreckage with Corporal Almer and Trooper Bilheimer still strapped in their seats. The wreckage was lifted by a Pennsylvania National Guard Skycrane helicopter at 4 p.m. The bodies of Corporal Almer and Trooper Bilheimer had been previously brought to the surface by Sergeant Wilson Knight, a diver from the Harford County, Maryland, Sheriff’s Department. According to the Lancaster County Coroner, Trooper Bilheimer died from multiple trauma while Corporal Almer died of drowning.

Trooper Bilheimer was buried with full military honors at Quarryville Cemetery in Lancaster County. He was survived by his wife, Mrs. Wendy Bilheimer, of Quarryville. The couple had celebrated their 24th wedding anniversary two days earlier. Mrs. Bilheimer was presented with the State Police Cross.

Trooper Bilheimer was 44 years old and had served 21 years and 3 months as a Pennsylvania State Trooper.