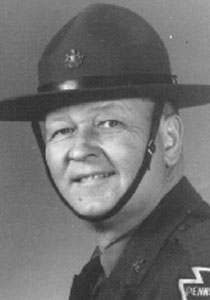 On Wednesday, June 7, 1978, Trooper Ebert was assigned to direct traffic at the Reading Air Show. While standing on a concrete medial barrier along Route 183 at the intersection with Road-to-Nowhere, Berks County, a pickup truck struck a school bus and then veered toward the center of the roadway where it struck Trooper Ebert. He was pronounced dead on arrival at the Reading Hospital.

Trooper Ebert was buried with full military honors at St. Joseph’s Cemetery in Lancaster Township. He was survived by his wife, Mrs. Gloria Ann Ebert, of Shillington. Trooper Ebert, 50, had completed 27 years and 10 months as a Pennsylvania State Trooper.