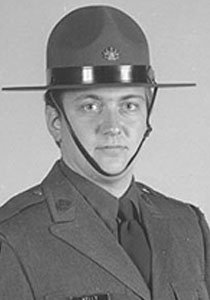 He was raised in Ellwood City and graduated from Lincoln High School, Ellwood City, in 1976. He enlisted in the Pennsylvania State Police on June 24, 1985. Following graduation from the Academy on October 11, 1985, he was assigned to Troop B, Carnegie. He transferred to Troop S, Milesburg on November 20, 1993, and to Troop B, Findlay on May 17, 1997.

Trooper Kelly was known among co-workers, friends, and family as respectful and respected, family oriented, and a true friend.

Trooper Kelly lost his life on November 7, 2001, on Interstate Route 79, in Robinson Township, between Neville Island and Route 60, when he was struck and killed by a sport utility vehicle as he was removing debris from the roadway.

Over 300 law enforcement officials from as far away as California joined more than 100 family members and friends at his funeral, which was held on November 11, 2001, in Ellwood City. He is buried at the Slippery Rock Presbyterian Church cemetery.

Colonel Paul J. Evanko, State Police Commissioner, stated: “It’s ironic that this job is everything he stood for. He believed in keeping the roads safe, and he died as a result of that.”

He is survived by his wife, Darlene; a daughter, Heather, and a son, Joshua, of Wampum, Lawrence County; his parents, Mr. and Mrs. Lloyd E. Kelly; and a sister, Lori.

At 43 years of age, Trooper Kelly was a 16-year veteran of the Department.