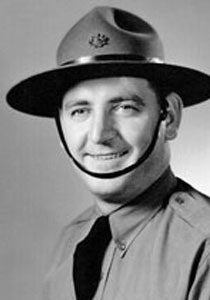 He enlisted in the Pennsylvania State Police from Nanty-Glo on October 4, 1954, and was assigned to Troop E-1, Erie, and subsequently Troop B-2, Turnpike Patrol. He was 25 years old and 6’2″ tall.

At 12:15 p.m. on August 21, 1958, Trooper Gyurke was standing on the berm of the Turnpike roadway in Westmoreland County checking the credentials of a stopped truck driver. A tractor-trailer left the main portion of the highway, struck the parked truck, and pinned Trooper Gyurke between both trucks. He was taken to Frick Memorial Hospital at Mt. Pleasant where he died of his injuries at 9:00 a.m. on August 24.

He was survived by his wife, Mrs. Margaret Gyurke, of Nanty-Glo, and his brother William P. Gyurke, who also served with the Pennsylvania State Police.

At 29, he had completed three years and ten months of Pennsylvania State Police service.