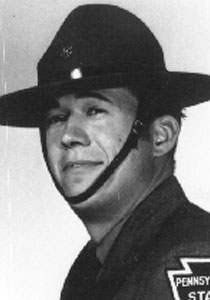 He served in the United States Navy from September 7, 1960, to September 19, 1963. Trooper Lapp enlisted in the Pennsylvania State Police from Reading on September 3, 1964, when he was 21 years old. Following graduation from the Academy, he was assigned to Troop J, Lancaster.

On October 16, 1972, Trooper Lapp was off duty. He stopped by the Lancaster Barracks. A task force of Troopers and local police was being formed to apprehend Alfred C. Ravenell, who had escaped from the New Jersey State Prison. Ravenell was serving three life sentences for murder. Trooper Lapp offered to join the task force and serve the fugitive from justice warrant. As Trooper Lapp broke into the unlighted hide-out apartment, Ravenell fired from the bathroom, killing him instantly. Ravenell was shot down by gunfire at the hands of fellow Troopers. Trooper Joseph J. Westcott suffered a scalp wound in the shoot-out. He was treated and released from the hospital.

Trooper Lapp was buried with full military honors at Saint Joseph’s Cemetery in Lancaster Township. Over 100 Troopers formed the funeral escort and honor guard. Approximately 1,000 police officers representing 100 police agencies from 9 states attended to pay their respects. He was survived by his wife, Mrs. Margaret A. Lapp, of Lancaster. Trust funds were immediately established by a number of Lancaster organizations to aid Mrs. Lapp and her three children. At 30, Trooper Lapp had completed eight years of Pennsylvania State Police service.