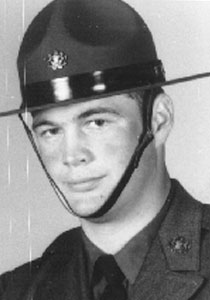 Trooper Ross enlisted in the Pennsylvania State Police on January 25, 1973, from Franklin. He was promoted to Trooper on July 12, 1973. Following graduation from the Academy, he was assigned to Troop D, New Castle. He subsequently transferred to Troop D, Mercer. ON April 27, 1978 he transferred to Troop E, Franklin where he remained until his End Of Watch. He was 22 years old and 6’1½” tall.

At 2:30 a.m. on May 15, 1986, Trooper Ross and Trooper John DePietro were assigned to investigate a hit and run accident. They were traveling toward Franklin, attempting to locate the hit and run vehicle on Bredinsburg Road in Cranberry Township, Venango County. At approximately 3:45 a.m., for an unknown reason, the patrol vehicle skidded, crossed the eastbound lane, traveled onto the berm for 80 feet, then struck a tree. Trooper Ross was taken to Franklin Regional Medical Center where he died at 4:35 a.m. Trooper DePietro suffered moderate injuries.

Memorial services for Trooper Ross were conducted at Christ Episcopal Church in Oil City. Trooper Ross was survived by his wife, Mrs. Christine W. Ross, and daughter, Bethany, of Franklin. Mrs. Ross was presented with the State Police Cross on September 18, 1986. At 35, Trooper Ross had served 13 years and 4 months as a Pennsylvania State Trooper.