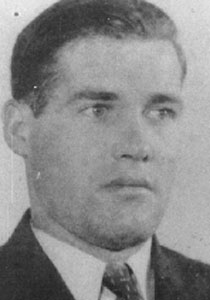 On November 3, 1957, Troopers Thomas McCann and John Devine, and Irwin DeHaven, a Douglass Township Police Officer, were detailed to take into custody 16-year-old William Henderson. Henderson was armed and had threatened to kill his father. Henderson got the jump on the trio of officers and held them captive in a wooded area in Douglass Township near Boyertown, Berks County. Trooper Melley was dispatched to assist. He found the teenager holding the other officers at bay with a shotgun. Trying to disarm Henderson, Trooper Melley slipped and fell to the ground. Henderson fired his shotgun, killing Trooper Melley instantly. He then dropped the shotgun and surrendered to the police.

Trooper Melley is buried in Saint Joseph’s Cemetery, Lehighton. He was survived by a brother, Joseph Melley, and sister, Margaret M. Melley, both of Summit Hill. At 41, Melley had completed 20 years of Pennsylvania State Police service.