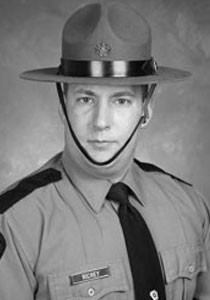 Paul G. Richey was born on August 29, 1969, to parents Clinton “Sam” Richey and Nancy Garmong Richey. In 1988, Paul graduated from Franklin High School, and in 1992, from Edinboro University.

Paul enlisted with the Pennsylvania State Police on May 17, 1993, and entered the 91st Cadet Class. He and his class completed training on November 10, 1993. Upon graduation, Trooper Richey was assigned to the Patrol Unit at Troop F, Milton, Northumberland County. He transferred to Troop E, Corry, on October 19, 1996, and to the Troop E, Franklin station on May 17, 1997.

Trooper Richey lost his life on January 13, 2010, as a result of a gunshot wound suffered while investigating a domestic disturbance. The incident began when Trooper Richey, along with Trooper Jason Whitman, responded to a call at approximately 1134 hours, regarding a domestic disturbance at 1432 Bredinsburg Road, Cranberry Township, Venango County.

The Troopers arrived at the scene at approximately 1145 hours. As they approached the house, a male voice called from a window for the Troopers to return to their car. The Troopers ordered the man to show himself.

Members of the Pennsylvania State Police Special Emergency Response Team entered the home at around 1815 hours. The actor, Michael J. Smith, and his wife, were found deceased in an upstairs bedroom, both with gunshot wounds. The investigation would reveal that Smith had murdered his wife, prior to taking his own life.

“Trooper Richey sacrificed his life rather than swerve from the path of duty,” said State Police Commissioner Frank E. Pawlowski. “We will not forget his service or his sacrifice.”

Governor Rendell noted, “A 16-year veteran of the force, Trooper Richey was struck down while carrying out his sworn duty to protect our citizens. This is a tragedy for the Pennsylvania State Police and the Commonwealth. Midge and I join with Pennsylvania’s citizens in extending our deepest sympathies to Trooper Richey’s wife, Carrie, and their two children. The Trooper’s sacrifice will never be forgotten.”

Over 2,000 law enforcement officers from states as far away as Alaska and California were in attendance at Trooper Richey’s memorial service at the Franklin Senior High School in Franklin, Pennsylvania, on January 17, 2010.

Trooper Richey is survived by his wife, Carrie, and their children; Connor, age 9, and Catherine, age 6. He is also survived by his parents, and a sister, Melissa Slack.

At 40 years of age, Trooper Richey was the 93rd member of the Department to be killed in the line of duty.