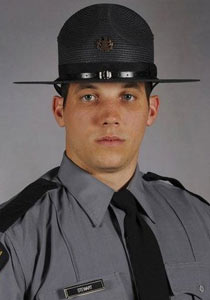 In 2008, Michael graduated from Greater Latrobe Senior High School, and later attended Indiana University of Pennsylvania where he earned a Bachelor’s Degree in Criminology.

Michael enlisted with the Pennsylvania State Police on January 6, 2014, as a member of the 138th Cadet Class. He and his class graduated on July 11, 2014. Upon graduation, Trooper Stewart was assigned to the Patrol Unit at Troop H, Chambersburg. He transferred to Troop A, Greensburg, on August 29, 2015.

Trooper Stewart lost his life on July 14, 2017, at approximately 2:21 a.m., while on patrol at the intersection of Route 711 and Route 271 in Ligonier Township, Westmoreland County, when his State Police SUV collided with a garbage truck. Trooper Travis J. November, also in the vehicle with Trooper Stewart, was transported to a local hospital with non life threatening injuries.

State Police Commissioner Tyree C. Blocker said, “my thoughts, and the thoughts of the entire Department, are with the family of Trooper Stewart during this difficult time. Trooper Stewart served the Commonwealth honorably, and we join all Pennsylvanians to mourn his passing.”

Governor Tom Wolf released the following statement on the death of Trooper Stewart:

“Frances and I were deeply saddened to learn of the loss of Pennsylvania State Trooper Michael P. Stewart. This young Trooper’s tragic death is a reminder of the selfless sacrifice made each day by every State Trooper and their families.

He served his fellow Pennsylvanians, his Troop, and our Commonwealth with honor and integrity. We join all Pennsylvanians in mourning his loss, and send our sincerest sympathies, thoughts, and prayers to his family, friends, and all the women and men of the Pennsylvania State Police.”

Over 1,000 law enforcement officers from states as far away as California and Texas were in attendance at Trooper Stewart’s funeral service at the Holy Family Church in Latrobe, Pennsylvania, on July 18, 2017.

In addition to his parents, Trooper Stewart is survived by his brother, Jason R. Stewart; his paternal grandmother, Rebecca “Becky” Stewart; his maternal grandparents, Richard and Mary Crawford; his girlfriend, Meredith A. Lehman; and several aunts, uncles, and cousins.

At 26 years of age, Trooper Stewart was the 98th member of the Department to be killed in the line of duty.