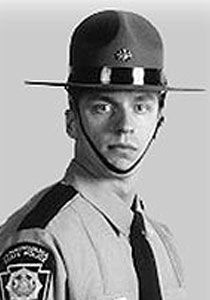 He was raised in Meadville and graduated from Edinboro University in 1994. He enlisted in the Pennsylvania State Police on September 25, 1995, a member of the 98th Cadet Class to graduate from the Academy in Hershey. Following graduation on March 22, 1996, Trooper Bond was assigned to Troop B, Belle Vernon, and transferred to Troop E, Erie, on September 5, 1998.

In his short tenure with the State Police, Trooper Bond epitomized the image of the Department. He was awarded the State Police Medal of Honor by Commissioner Paul J. Evanko during a ceremony on August 27, 1999, for his role in attempting to rescue a woman and her young daughter who were trapped in their burning home in Harborcreek Township, Erie County, on December 5, 1998.

Trooper Bond was critically injured on Thursday, January 13, 2000, when the marked police vehicle in which he was a passenger was rammed from the rear on Interstate 90 in Harborcreek Township, Erie County. Trooper William Stuckey, operator of the vehicle, had pulled onto the berm so the Troopers could assist a motorist whose vehicle had slid into the median. Trooper Stuckey was released after treatment at Hamot Medical Center but Trooper Bond had received massive injuries and died on Friday, January 14, 2000.

A memorial service held on January 17 at Edinboro University’s McComb Fieldhouse was attended by family, friends and hundreds of law enforcement officers from throughout the state and from as far away as Delaware and Michigan.

Governor Tom Ridge called the death of Trooper Bond a tragic loss for the people of Pennsylvania. He stated,

“Although he was only 28 years old, Trooper Bond already had distinguished himself as an outstanding law enforcement officer and public servant.”

He is survived by his wife, Michelle (Shelly) L. Bond of Erie; his mother, Mrs. Vicki Chandler, and his father, Mr. Daniel Bond, both of Meadville; a sister, Valerie L. Bond of Pittsburgh; and a stepbrother, James M. Chandler of North Carolina.

Only 28 years old, he had served four years and four months with the Pennsylvania State Police.