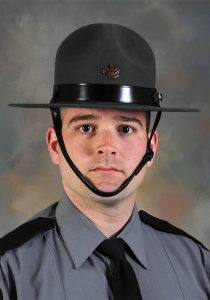 Trooper Martin F. Mack III was a graduate of Monsignor Bonner High School in Drexel Hill and Albright College in Reading. He followed in the footsteps of his father, Martin Mack II, a U.S. Marine Corps veteran, by joining the U.S. Army National Guard where he attained the rank of sergeant. Trooper Mack enlisted in the Pennsylvania State Police in November 2014 and graduated as a member of the 141st cadet class. He spent his entire career assigned to the Patrol Unit in Troop K, Philadelphia, serving the citizens of the Philadelphia area, and was a member of the busy midnight shift. He leaves behind his wife, Stephanie; daughters, Olivia and Rowan; and parents, Martin and Florence.

On Monday, March 21, 2022, Trooper Mack and Trooper Branden Sisca were dispatched to a report of a pedestrian on I-95 south, near the sports stadiums in Philadelphia. They located the man, Reyes Rivera Oliveras, 28, of Allentown, and were placing him in their patrol vehicle when an intoxicated woman struck and killed all three men with her vehicle shortly before 1:00 a.m.

“I will remember my hero as an amazing father, best friend, and my filter, my sounding board and my husband,” Stephanie said while speaking about her husband at the funeral. “The girls were incredibly lucky to have you – even if that time was cut incredibly too short.”

Delaware State Police Corporal Paul Laplaca was Trooper Mack’s best friend and also spoke about the kind of man “Marty” was. “Marty was a great trooper, but he was an even better father,” he said. “Marty was the most loyal, dependable person I have ever known.”

At 33 years of age, Trooper Mack was the 101st Pennsylvania State Trooper who died in the line of duty. A funeral service was held at St. Michael the Archangel Church in Levittown, and he was buried in Our Lady of Grace Cemetery in Langhorne, Bucks County.