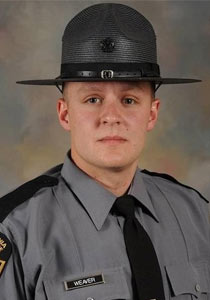 Trooper Weaver was born on November 11, 1993 in Altoona, PA. After graduating high school in 2012, he attended the Indiana University of Pennsylvania before enlisting in the Pennsylvania State Police in December 2015. Upon graduation from the Academy on June 17, 2016, he was assigned to Troop G, Huntingdon. On December 30, 2016, he was killed in the line duty while investigating a protection from abuse (PFA) order violation in Juniata Township, Huntingdon County.

Funeral services were held on January 5, 2017 at the Blair County Convention Center. He is survived by his parents, brother, and wife.