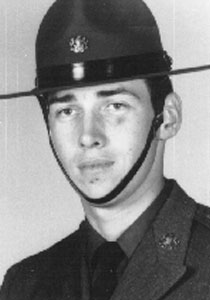 He served with the 109th Infantry, ANG, Scranton. He also served on active duty with Company B, 4th Battalion, 1st BCT Brigade from June 26 to August 27, 1970, and with Company D, 17th Battalion, 4th CST Brigade from August 28 to October 23, 1970, at Fort Jackson, South Carolina. Welsch enlisted in the Pennsylvania State Police from Archbald on January 25, 1973, and was assigned to Troop F, Montoursville. He was 22 years old and 6’1″ tall.

On September 13, 1977, he was detailed to assist Constable Walter Mitchell of Covington, Tioga County, in serving a surety of the peace and criminal trespass warrant on Mark F. Geddes, 28, of Covington. The warrant had been issued following an altercation between Geddes and his father. As Trooper Welsch and Constable Mitchell approached Geddes, he shot and killed the Trooper. Constable Mitchell suffered a bullet wound of the neck and was taken to a hospital in Elmira, New York, for treatment. Geddes was apprehended and charged with murder.

Trooper Welsch was buried with full military honors at St. Thomas Aquinas Cemetery, Archbald. He was survived by his wife, Mrs. Jean M. Welsch, of Mansfield. She was presented the State Police Cross on December 13, 1977. At 26, Trooper Welsch had completed four years and eight months as a Pennsylvania State Trooper.