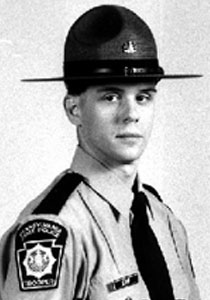 He was raised in Windber and graduated from Windber Area High School in 1986. He received a bachelor’s degree from the University of Pittsburgh at Johnstown in 1991.

He enlisted in the Pennsylvania State Police on February 24, 1992. Following graduation from the Academy on July 16, 1992, he was assigned to Troop F, Montoursville. In May 1995 he transferred to Troop A and served at the Somerset Station until October 1996 when he transferred to Ebensburg Station.

Trooper Sepp was highly respected among his colleagues, in his community, and by anyone who knew him. His lifelong dream was to be a State Trooper.

Trooper Sepp lost his life on November 10, 2002, about 38 hours after being shot by a fleeing suspect in a high-speed chase in Ebensburg. The chase began around 1:30 a.m. on November 9 when local police pulled over Mark R. Leach, 45, of Summerhill, on state Route 160 near New Germany, Cambria County. Leach showed a weapon and drove off, with local police in pursuit. State Police were notified and Troopers Sepp and Brian Lampel were on the scene when Leach crashed his car into a utility pole in Ebensburg. Leach exited his car and fired into the car with the two Troopers, hitting Trooper Sepp in the head.

Over 1200 law enforcement officers from California to Maine were in attendance at St. Anthony of Padua Roman Catholic Church in Windber on November 14. A solemn procession of columns of police officers marched in formation to the cemetery.

Trooper Sepp is survived by his wife, Jenny; a daughter, Amanda Jo, and two sons, Joey and Andy. He is also survived by his parents Joseph and Lana Gay Sepp, and a sister, Tina Sepp, all of Windber.

At 34 years of age, Trooper Sepp, a 10-year veteran of the Department, was the 89th member to be killed in the line of duty.