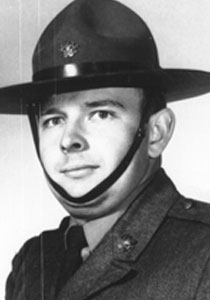 He enlisted in the Pennsylvania State Police from Catawissa on September 3, 1964. Following graduation from the Academy, he was assigned to Troop A, Greensburg. He transferred to Troop F, Montoursville and then to the Region IV Strike Force at State College. He was 21 years old and 5’11” tall when he enlisted.

On May 9, 1988, at 8:30 a.m., Trooper Andrulewicz was returning home from an overnight assignment with the Strike Force. He lost control of his vehicle on Route 45 in Haines Township, Centre County. The vehicle landed on its roof in a six-foot ditch along the berm of the road. The roof collapsed, fatally injuring Trooper Andrulewicz.

He was buried with full military honors at All Saints’ Cemetery in Elysburg.

Trooper Andrulewicz, 44, was survived by his wife, Rae Audine, of Middleburg. He had been a Pennsylvania State Trooper for 23 years and 8 months.