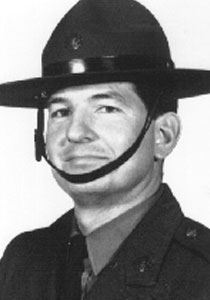 He served with the US Air Force from December 31, 1956, to December 6, 1960. Trooper Wirfel enlisted in the Pennsylvania State Police from Portage on September 7, 1961. Following graduation from the Academy, he was assigned to Troop D, Butler. He was 24 years old and 5’10” tall.

On Sunday, February 7, 1982, Trooper Wirfel was on patrol on U.S. Route 22 in Cambria County. An unidentified motorist ran through the radar zone at 72 mph. Trooper Wirfel pursued the vehicle in unfavorable weather and road conditions. His patrol vehicle struck a snow drift partially covering the passing lane and skidded off the right side of the highway into a frozen snow bank. He was pronounced dead at the scene.

Trooper Wirfel was buried with full military honors at Holy Name Cemetery, Ebensburg. He was survived by his wife, Mrs. Elizabeth Wirfel, of Ebensburg, and seven children. At 45, Trooper Wirfel had completed 20 years and 5 months as a Pennsylvania State Trooper.