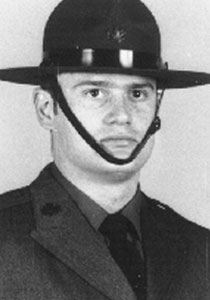 He enlisted in the Pennsylvania State Police from Mineral Point on December 8, 1980. Following graduation from the Academy, he was assigned to Troop B, Washington. He transferred to the Region V Strike Force in May 1983. He was 22 years old and 5’9″ tall.

On February 3, 1985, Trooper Fisher was shot and killed during a cocaine buy and arrest incident at the Crossroads Plaza, East Huntingdon Township, Westmoreland County. Trooper Fisher confronted Timothy Gray, James William Lincoln, and Mark Goodwin after a buy of $2,100. When Trooper Fisher attempted to take Gray into custody, a struggle took place on the snow-covered parking lot and Trooper Fisher was shot with his own service revolver. Gray, 21, of Bryson Hill, Fayette County, was charged with homicide.

Trooper Fisher was buried with full military honors at St. Mary’s Cemetery in Patton, Cambria County. Hundreds of police officers attended to pay their respects. Trooper Fisher was survived by his parents, William and Patricia Fisher, of Mineral Point. He was 26 years old and had been a Pennsylvania State Trooper for four years and two months.