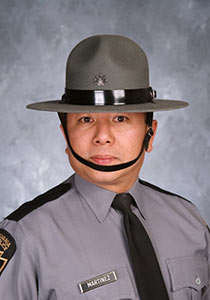 “Our department expresses deep sorrow for the sudden loss of a colleague and friend,” said Colonel Evanchick. “We wish Trooper Martinez’s family and friends comfort and peace during this difficult time and ask Pennsylvanians to keep them in their thoughts.”

Trooper Martinez enlisted in the Pennsylvania State Police in April 2000 and graduated as a member of the 107th cadet class. Upon graduation he was assigned to Troop K, Media. He would later work at Troop J, Lancaster and Troop M, Trevose during his career with the department. He was a recipient of the Blooming Grove Service Award for participating in the 2014 manhunt of Eric Frein.

He is survived by his wife and two children.