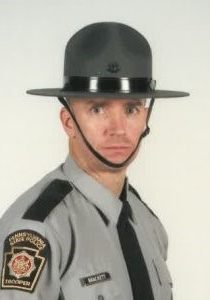 On May 18, 2019, Trooper Donald C. Brackett died in the line of duty, having served our commonwealth as a Trooper for nearly two decades. He previously served our nation as a U.S. Marine. He is a hero who will live in our hearts forever.

The time has come to end this family’s suffering so they can move on with their lives. The time also has come to recognize Trooper Brackett for making the ultimate sacrifice.

Trooper Donald C. Brackett will forever be remembered by the PSTA as an extraordinary individual and a hero. He lived the oath to serve and protect those in the commonwealth, and he died in pursuit of that mission. We will never forget his sacrifice.