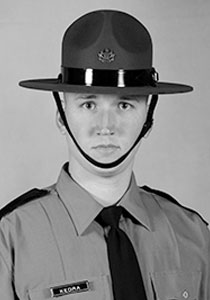 Trooper Kedra was born on December 6, 1987. He was a 2006 graduate of Roman Catholic High School and 2010 graduate of Temple University where he earned a degree in Criminal Justice. He enlisted in the Pennsylvania State Police on June 18, 2012. After graduation from the Academy, he was assigned to Troop K, Skippack, on December 21, 2012. He served in the Patrol Unit, where he was named Trooper of the Month for July 2013.

On September 30, 2014, he was fatally wounded when he was struck by a bullet that was accidentally discharged during a training session at the Montgomery County Public Safety Training Complex.

Memorial services were held on October 6, 2014 at Christ the King Church in Philadelphia, PA. He is survived by his parents, two brothers, a sister, and fiance.