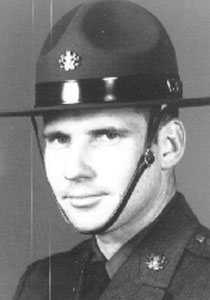 He served with the US Air Force from January 1962 to April 1965. Trooper Monahan enlisted with the Pennsylvania State Police from New Milford, Susquehanna County, on April 22, 1971. Following graduation from the Academy, he was assigned to Troop K, Philadelphia, and later transferred to Troop J, Lancaster. He was 29 years old and 5’9″ tall.

On April 17, 1980, Trooper Monahan and Trooper Berchard Suber were setting up a roadblock on Route 352 in East Goshen Township in an effort to apprehend a burglary suspect. The suspect was being pursued by Troopers from the Franklin Center Station and local police following reports of burglaries in Delaware County. The chase led them to Chester County where Troopers Monahan and Suber were setting up the roadblock. The suspect, later identified as Victor E. Brown, Jr., of Chester, rammed the passenger side of the patrol car occupied by Trooper Monahan. It took a rescue crew an hour to free Trooper Monahan from the wreckage. He was rushed to Paoli Memorial Hospital where he died in surgery. Trooper Suber suffered contusions and abrasions. Brown, who suffered a cerebral concussion, was charged with homicide by motor vehicle.

Trooper Monahan was buried with full military honors at St. Augustine’s Cemetery, Silver Lake, Susquehanna County. He was survived by his wife, Mrs. Sally Monahan, of Boyertown. At 38, Trooper Monahan had completed nine years as a Pennsylvania State Trooper.