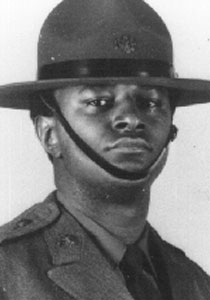 Clinton W. Crawford was born May 11, 1957, at Uniontown, Pennsylvania.

He enlisted in the Pennsylvania State Police from Lamberton on February 16, 1981. Following graduation from the Academy, he was assigned to Troop S, Milesburg. He was 23 years old and 5’9″ tall.

At 8:15 p.m. on August 17, 1987, Trooper Crawford was summoned to the scene of an accident on I-79 in Aleppo. Officer Terrence Meyers of the Ohio Township Police Department was already there. Trooper Crawford told one of the drivers involved in the accident to remain in the car since there could be leaking gasoline that might cause a fire. As Trooper Crawford was returning to his patrol car to check the driver’s registration and operator information, a tractor-trailer jackknifed and slammed into him. He was killed instantly. Officer Meyers and Alan Stewart, a civilian at the scene, were injured.

Trooper Crawford was buried with full military honors at Lafayette Memorial Park in Redstone Township, Fayette County. He was survived by his mother, Mrs. Pauline Crawford, of Lamberton. Trooper Crawford was 30 years old and had served 6 1/2 years as a Pennsylvania State Trooper.