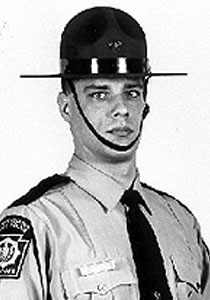 Brian A. Patterson was born May 17, 1966, in Titusville, Crawford County, Pennsylvania.

He graduated from Titusville High School in 1984. He enlisted in the Pennsylvania State Police on September 27, 1993. Following graduation from the Academy on March 10, 1994, he was assigned to Troop F, Coudersport. He transferred to Troop E, Franklin, in June of 2000.

More than 1000 persons, including Lieutenant Governor Catherine Baker Knoll, State Police Acting Commissioner Jeffrey B. Miller and hundreds of state and municipal police officers attended the funeral services that were held on February 18 in Titusville.

He was remembered as a family man who was quick to come to the aid of others.

Acting State Police Commissioner Jeffrey B. Miller stated: “He was a pillar of his community. He was well respected, took his oath very seriously and gave his life in the performance of his duties.”

Among his survivors are his wife, the former Julie Brickner; a daughter, Desirae; a son, Tyler; and his parents, Allan Patterson and Eva Wallace Leithead.

He is buried in Fairview Cemetery in Cherrytree Township, Venango County.

Trooper Patterson had been with the Department for 9 years; he was 36 years old.

He was the 90th member to die in the line of duty.