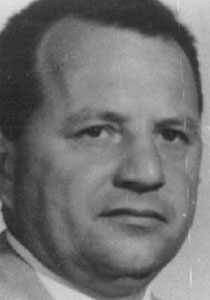 Prior to his enlistment in the Pennsylvania Motor Police, he served in the United States Marine Corps from March 14, 1944, to April 3, 1946.

He enlisted in the Pennsylvania Motor Police from Coaldale on October 1, 1941, when he was 23 years old. He was assigned to Troop A-3, Hazleton.

At 2:55 p.m. on October 3, 1961, Trooper Bensch and Troopers Robert Latzo and Joseph F. Murphy had attended revolver-firing qualifications at Troop Headquarters and were returning to their station. Trooper Latzo was driving the patrol vehicle on Route 9040, 1½ miles east of Blakeslee Corners, Tobyhanna Township, Monroe County. He tried to avoid striking a deer. The vehicle skidded on the wet roadway and struck a tree. Trooper Bensch was thrown from the vehicle and killed instantly.

Trooper Bensch is buried in Saint Nicholas Russian Orthodox Cemetery in Hometown. He was survived by his mother, Mrs. Wash Bensch, of Hometown.

At 43, Bensch had completed 20 years of Pennsylvania State Police service.