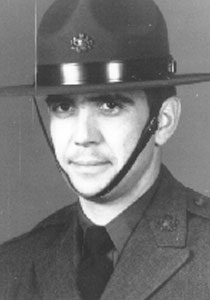 He served with the US Marine Corps in the United States and in Vietnam from March 12, 1964, to January 22, 1970. Trooper Izzo enlisted in the Pennsylvania State Police from New Castle on July 19, 1971. Following graduation from the Academy, he was assigned to Troop C, Punxsutawney. He later transferred to the Region IV Strike Force in Troop D, Butler. He was 27 years old and 5’8 3/4″ tall.

At 2:30 a.m. on June 13, 1979, Trooper Izzo was part of a Strike Force detailed to raid a New Castle home. The raid was part of a prearranged drug purchase and culminated a drug investigation. The detail was assisted by police from Youngstown, Ohio. There was an exchange of gunfire and Trooper Izzo was mortally wounded. He was taken to St. Francis Hospital in New Castle where he died at 5:30 a.m. Joseph Querriera, 28, and Floyd Monaco, 29, both of New Castle, were arraigned on charges of murder and criminal homicide. Gary Perretta, 26, and Joseph Frank, 29, also of New Castle, were charged with possession of controlled substances with intent to sell or deliver. A female juvenile was also taken into custody.

Trooper Izzo was buried with full military honors at St. Anthony’s Cemetery, Bessemer, Lawrence County. He was survived by his wife, Mrs. Barbara J. Izzo, of New Castle. Trooper Izzo, 35, had completed 7 years and 11 months as a Pennsylvania State Trooper.