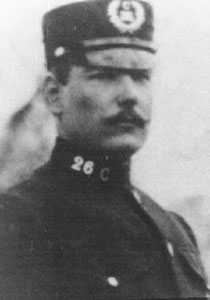 He was naturalized as a US Citizen at Somerset County Court House on September 16, 1905. He was enlisted by Captain William P. Taylor at Troop C, Reading, December 15, 1905. He resided at Elk Lick (Salisbury) Somerset County. He was a coal miner, working for coal operator John Meager at Elk Lick. He was 26 years old and was 5’11” tall. Prynn was promoted to Sergeant July 18, 1907.

On January 26, 1909, Sergeant Prynn, and Private Reginald Gibson were taking into custody Charles Razinski at Gilbertson. Razinski was wanted for a stabbing at Mahanoy City. Sergeant Prynn dismounted and placed cuffs on Razinski, while Private Gibson covered them. When Private Gibson’s horse bolted, his gun accidentally discharged, wounding Sergeant Prynn in the shoulder. He was treated by a local doctor and taken to Ashland Hospital. He was expected to recover. Due to a serious infection, he underwent emergency surgery and died February 9, 1909.

At 29, Sergeant Prynn had completed three years and two months of Constabulary service. His body was shipped from Ashland by railroad to Elk Lick for burial at the Salisbury Cemetery. The sum of $100 was approved for burial expenses. Sergeant Prynn was survived by his mother, Mrs. Luke Prynn, of Tywardreath, England, who depended upon her son for support.