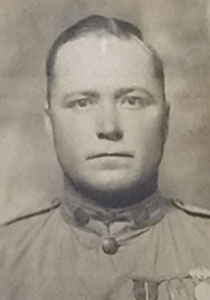 Prior to his employment with the Constabulary, he served 30 years with the US Cavalry and US Marine Corps. He was honorably discharged January 31, 1927, with the distinguished rank of Sergeant Major. At the time of his employment on March 12, 1927, he resided at Drumright, Oklahoma. He was 5′ 7½ ” tall and 43 years old. He was employed as a civilian inspector and instructor of small arms at the Constabulary Training School but was soon given enlisted status with the rank of Sergeant.

On May 8, 1927, Sergeant Thomas was a passenger in a patrol vehicle driven by Captain Albert Carlson. The vehicle became involved in a three-car collision on Ridge Pike, just west of Jeffersonville, Montgomery County. Sergeant Thomas was thrown from the vehicle and suffered extensive injuries. He died before reaching Norristown Hospital. Carlson was injured but recovered.