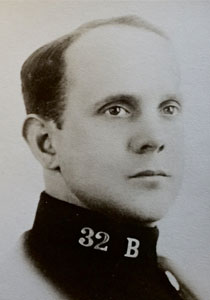 On October 17, 1924, while trying to dislodge a jammed cartridge in his revolver at Troop headquarters, he was accidentally shot and killed. At the time of his death he was the Troop Quartermaster Sergeant. He was buried in Dennison Cemetery, Swoyersville.

Sergeant Haas was survived by his wife, Mrs. Edwin F. Haas, of Harrisburg. He was 35 and had completed 14 years of Constabulary service.