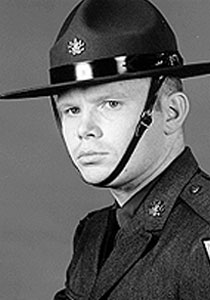 He served with the United States Army Combat Engineers from June 1964 to May 1967 as a squad leader and was discharged as a Sergeant E-5. On April 22, 1971, at the age of 23, Hershey enlisted in the Pennsylvania State Police from McConnellsburg. He graduated from the Academy on July 14, 1971, and was assigned to Troop F, Montoursville, where he served at the Montoursville, Mansfield and Lock Haven Stations.

Sergeant Hershey was en route to Harrisburg via the Pennsylvania Turnpike on Sunday, January 3, 1999. He was to train with the Pennsylvania State Police Mounted Unit which was scheduled to perform in opening ceremonies at the State Farm Show. While stopped at the scene of an accident in Dublin Township, Fulton County, he was conversing with Trooper David P. Thomas, who was investigating the accident. The road surface at this point, milepost 180.2, eastbound lane, was icy and slush covered. The time was 1:02 p.m. While exchanging information with Trooper Thomas, they noticed a green pickup truck sliding out of control and heading for them. Trooper Thomas jumped free of the oncoming truck which then rolled over, striking Sergeant Hershey. He was killed instantly. The driver of the pickup, Linda C. Reppert, 33, of Allentown, escaped serious injury.

Services were held for Sergeant Hershey on January 6, 1999, at the Louis Geisel Funeral Home in Bedford. He was buried with full military honors at the Friends Cove United Church of Christ Cemetery in Colerain Township, Bedford County. In attendance were hundreds of fellow Troopers and law enforcement officers from Pennsylvania, Maryland, New Jersey, and Delaware.