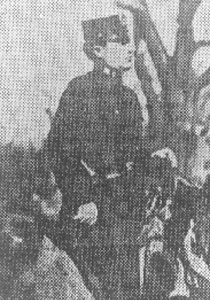 Before enlisting with the Constabulary, Kelleher fought with the Boers during their war with England. In the United States, he served as Trooper and Corporal with Troop M, 2nd U.S. Cavalry, from January 24, 1899, to January 23, 1902, and saw action in the Philippines. Before enlisting in the Constabulary on December 15, 1905, he was an egg inspector in Pittsburgh. He had resided at 531 Second Avenue in Pittsburgh, but was assigned to Troop C, Reading. He was 27 years old and 5′ 6″ tall.

En route to the Reading Barracks to report for duty on September 14, 1907, he heard a woman’s screams. He saw two men beating a young woman and went to her rescue. During the struggle one of the men plunged a knife into Kelleher’s side. The assailants carried his body and tossed him over a railroad embankment into a dump. His body was discovered the following morning by J. Oscar Seidel, of Reading, a Pennsylvania Railroad employee. The examining physician stated Kelleher died within minutes from severe lacerations. The woman, Bertha Bernhart, was located and stated that Kelleher had saved her life because the two assailants had threatened to kill her. One, Salvatore Guto, was arrested at Warwick, New York, and the other, Stefano Pucella, was apprehended at Graycourt, New York. Lieutenant J. L. Reese, Trooper J. B. Cady of Troop C, and Detective George F. Kemp of the Reading Police Department were the arresting officers. The trial was brief, as Bernhart faced her assailants in court and identified them as the killers. On October 29, 1908, Guto was hanged at the Berks County Prison. Pucella was sentenced to 12 years of hard labor in the Eastern Penitentiary. Kelleher was survived by his father, Mr. Timothy X. Kelleher of County Cork, Ireland, and two brothers in Pittsburgh. Kelleher’s body was released to his brothers.

He was buried through the courtesy of American Veteran’s Foreign Service Post #3 in Calvary Cemetery, Pittsburgh. Kelleher had completed one year and nine months of Constabulary service. He was 29.