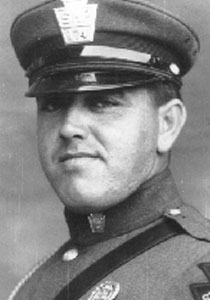 At 8:20 p.m. on June 17, 1941, Private Carey and Private J. J. Comerford were dispatched to the scene of an accident on U. S. Route 22 near Boltz’s Corner, Berks County. Upon arrival at the accident scene, they saw two occupants trapped in a wrecked vehicle which was in flames. Private Carey assisted firemen in putting the fire out, using a state-issued carbon tetrachloride extinguisher. He became ill immediately and was taken to a nearby doctor’s office where he collapsed and died at 10:00 p.m. Dr. Paul D. Good, Berks County Coroner, attributed death to acute suffocation caused by poisonous fumes.

All carbon tetrachloride extinguishers were withdrawn from service and replaced with non-toxic extinguishers.

He was survived by his wife, Mrs. Mary M. Carey, of Duncannon.

At 31, he had completed six years and one month of Pennsylvania Motor Police service.