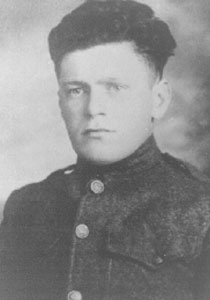 Prior to his enlistment with the Constabulary, he served with Company A, 108th U.S. Machine Gun Battalion. He saw service in World War I and engaged in the major battles at Marne, Meuse Argonne, Thiacourt and Vesle. His military service began May 30, 1917, and ended May 26, 1919. He enlisted with the Constabulary on November 1, 1919, and was assigned to Troop E at Lancaster.

As he was grooming a new horse on November 21, 1919, he was kicked in the abdomen. He was taken to the Lancaster General Hospital for surgery for serious internal injuries to his intestines and bladder, but died December 1, 1919. Christ’s body was shipped back to Pine Grove for burial in the St. John’s Lutheran Cemetery.

He was survived by his mother, Mrs. Sarah Christ, owner of Christ Coal Company, Pine Grove. Christ, 22, had completed only one month of Constabulary service.