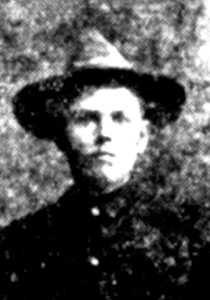 Before enlisting with the Constabulary. He spent five years in military service: one year with Co. G. 15th US Infantry; one year with Co. H. 36th US Infantry; and three years with the 5th Battery, US Field Artillery. He held the rank of Sergeant at the time of his honorable discharge. He enlisted with the Constabulary on August 14, 1907, and assigned to Troop A, Greensburg. He was 27 and 5’8½” tall.

On August 22, 1909, Privates Williams, Jack C. Smith, Lucian Jones, George Kitch, and Patrick O’Donnell, were sent to the Pressed Steel Car company plant at Schoenville, near McKees Rocks, Allegheny County, where a riotous strike was in progress. Enroute they were attacked by a mob at O’Donovan’s Bridge, Schoenville. Privates Williams and Smith were shot and killed. Their bodies were looted of cash and other possessions. The other Troopers were seriously injured.

Private Williams’ body was shipped by rail for burial at the Spanish-American War Veterans’ lot, Roselawn Cemetery, Pueblo, Colorado. His body was accompanied by a Trooper. He was survived by his mother, Mrs. M. B. Williams.

“The Superintendent announces with deep regret the deaths of Privates John L. Williams and Jack C. Smith, Troop A, in the line of duty performed at McKees Rocks, Pennsylvania, on the night of August 22, 1909. The unfaltering devotion to duty displayed against the greatest odds by the deceased will stand alone a glorious page in the history of the Force. While the Department mourns the loss of two men of noble fiber, this opportunity is also taken to express the highest commendation and sincere sympathy for the injured comrades who stood so nobly by them in the moment of peril.”

On January 4, 1920, Superintendent Groome wrote to Congressman John A. Martin, stating there is nothing in Pennsylvania law to relieve dependents of deceased Troopers. “I endeavored to have a law of this sort passed at the last session of the State Legislature, but I was not successful.” At 29, Private Williams had completed 2 years of Constabulary service.