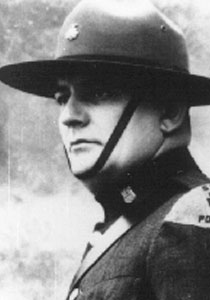 At 21 years of age he enlisted in the Constabulary from Hazleton on January 10, 1918. He was assigned to Troop B, Wyoming.

During the late evening hours on August 13, 1937, Private Broski left the barracks to interview a witness in the Bradshaw murder case, which he was investigating. He could not see the witness earlier in the day. As he left, he told fellow Troopers that this was going to be his last investigation, because he was going to retire. Private Broski made this statement often. Private Broski entered the Boulevard Inn on East End Boulevard near Wilkes-Barre where he was to meet the witness. As he was interviewing the witness, two young men armed with a shotgun and a hand gun entered the inn. At the command to raise their arms, Private Broski did so while trying to get a better look at the two. At that time, one of the men fired his shotgun at close range in Broski’s back. The other man jumped the bar and cleaned out the cash register. Both men escaped.

Private Broski was taken to Wilkes-Barre General Hospital where he died at 11:20 a.m. on August 14, 1937. His spine and kidneys had been severely damaged.

He was buried with military honors in St. John’s Cemetery in Dallas. Private Broski was survived by his wife, Mrs. Nellie Broski, and three children. At 40, Broski had completed 19 years and 7 months of Constabulary service. He was posthumously awarded the Distinguished Service Medal.

The suspects were later identified as Horace Bowers and Victor Andreoli. Both were apprehended in Philadelphia, tried for murder, and drew life sentences to be served at the Eastern Penitentiary. Andreoli escaped and was eventually spotted at a diner in Chester. At 8:00 a.m. on November 6, 1943, Privates Rocco P. Urella and Peter R. Waselefsky entered the diner. As the plainclothesmen sat on each side of Andreoli, he jumped from his seat and fired at Urella who was wounded. Urella returned fire and shot Andreoli, who was pronounced dead upon arrival at the Chester Hospital. Urella survived his wound and was cited by Governor Edward Martin. Urella was later to head the Pennsylvania State Police during the tenure of Governor Milton Shapp.