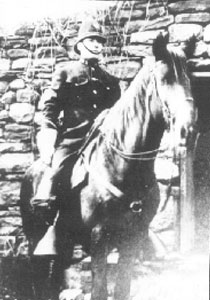 Private Garscia and Private Frederick Carlton were serving warrants in Inkerman, Luzerne County, on Saturday night, February 13, 1909. When Private Carlton drew his revolver, the weapon accidentally fired wounding Private Garscia. The bullet penetrated Private Garscia’s liver. He underwent surgery at Pittston Hospital, where he died on February 21. Private Garscia confirmed the affair as an accident and on his deathbed he so advised his parish priest.

A funeral band and a procession of Troop personnel accompanied his body to the Wyoming railroad station. His pallbearers were Privates Chalkley Booth, Joseph Carroll, Walter Henning, Jasper Oftedall, Thomas Parkinson, and Robert Tipton. The sum of $100 was approved for burial expenses.

Private Garscia was buried at Sacred Heart Polish Cemetery in Scranton on February 24, 1909. Private Garscia was survived by his wife and son, who moved to Warsaw, Poland. The U. S. Consulate was notified that the widow was a hardship case. The Troop offered to help from personal funds if her situation included a need for food and clothing. (The State’s Workmen’s Compensation Act was not approved until June 2, 1915.) At 35, Private Garcia had completed three years and three months of Constabulary service. Grieved by this accidental shooting and the death of his comrade, Private Carlton threatened to take his own life. He was relieved of his gun as a safeguard.