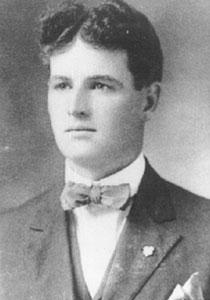 Henry was the first Constabulary member to be killed in the line of duty. He was shot and killed at Florence, Jefferson County, as he and other Troop D members attempted to arrest heavily armed Black Hand Society fugitives on the afternoon of September 2, 1906. In need of assistance to apprehend the fugitives barricaded in a home, Sergeant Joseph Logan phoned for help. A detachment arrived at 4:30 p.m. Henry immediately advanced to the house but when about 20 feet from it, he was shot down. Privates Homer Chambers and William Mullen, attempting to rescue Henry, were seriously wounded before they could reach him. A phone call was made for additional support. A second detachment of 15 Troopers arrived at 6:30 p.m. Covered by heavy gunfire, Privates Francis Zehringer, Robert Cummings, and August Grosser rushed to the house, battered in the side door, and entered the dwelling. They were fired upon by fugitives from a stairway and Zehringer was mortally wounded. Cummings and Grosser escaped. Realizing that lives were being sacrificed uselessly, the Troopers, under cover of darkness and a rainstorm, placed dynamite at the base of the house. At dawn, the dynamite was detonated. The house was destroyed and its inhabitants killed. Chambers and Mullen recovered from their wounds. Henry was survived by a sister, a resident of Philadelphia. A rosary found in Henry’s uniform blouse pocket was given to his sister.

His body was taken from Punxsutawney to Philadelphia by train and he is buried at St. Dennis Cemetery, Philadelphia. Henry, 31 at the time of his death, had completed nine months of Constabulary service.