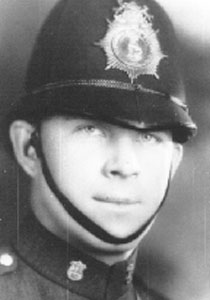 He enlisted in the Constabulary on March 1, 1933, and was assigned to Troop E, Harrisburg. He was 28 years old; 6′ tall. Before joining the Constabulary, he was employed with the Pine Knot Colliery.

At 11:00 p.m. on April 22, 1937, Private Fessler and Private Thomas A. Hooper were assigned to assist Montour County Sheriff E. Riley Lindner and his deputy, Joseph Wray. The Sheriff was attempting to serve a warrant on William Yeager, a Cooper Township farmer. Yeager, in a drunken rage, had been terrorizing his wife and family, all of whom had fled the house.

As the Troopers approached the house, Yeager fired, wounding Private Fessler. Private Hooper and the Sheriff rushed the house returning Yeager’s gunfire and entered the dwelling where Yeager was wounded. Yeager was taken to Danville Hospital where he recovered.

Private Fessler was taken to Geisinger Hospital at Danville where he died the following day, April 23, 1937. Private Fessler is buried in the Cressona Cemetery. Pall bearers were Corporal Buckbee and Privates Murray, King, Schuster, Prior, and Ramer. Members of the firing party were Corporal Gritman and Privates Heuer, Stansfield, Fisher, Trout, Cooper, Johnson, Kinback, and Packler. The bugler was Private William Doll.

Private Fessler was survived by two sisters, Helen Sweigart and Annie Berger, and two brothers, William and Sterling, all of Cressona. At 32, he had completed four years and two months of Constabulary service.

In the first Montour County murder trial in 40 years, Yeager was tried and found guilty. Judge Charles C. Evans sentenced Yeager to die in the electric chair on May 28, 1937. After several stays for appeals, Yeager was scheduled for execution on Monday, February 25, 1940.

The day before, while officers were preparing to take Yeager to Rockview for execution, Yeager shot himself in his prison cell and died before he could be taken to the hospital. Visiting him earlier were family members and friends, one of whom smuggled a gun into the prison. Yeager was to be executed with two others in a triple execution. Executioner Frank Lee Wilson proceeded with a double execution.