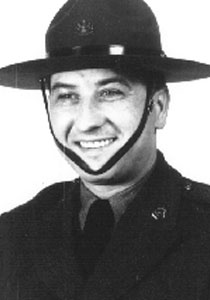 He served in the United States Navy for four years during World War II. He enlisted in the Pennsylvania State Police from McAdoo on May 1, 1947, and was assigned to Troop A-2, Harrisburg. He was 24 years old and 5’11” tall. At 10:35 p.m. on July 24, 1950, Private Ditkosky was on duty on U S Route 22, four miles east of Harrisburg. A truck driver who had fallen asleep struck Private Ditkosky’s vehicle. He was killed instantly. The truck continued on, striking another vehicle.